Yes, you read that correctly. Together, my partner and I voluntarily embarked on a cross-country road trip in a rental car from our apartment in New York City to Spokane, Washington; a 2,600-mile excursion.

Firstly, before I explain the adventure, we need to circle back to December 2018 which is when we first discovered the two of us were capable of one, driving a car since our relationship solely lived within the confines of a carless relationship in Manhattan, and two that we had previously completed a 21-hour drive within a 24-hour rental window.

See during Christmas, flights to Florida, let alone Naples, Florida, are outrageous. So, being the young adults we are, we felt it was worth saving 600 dollars if it means we could rent a car for 120 dollars and get there in a day.

As it was a success, we found ourselves planing for our Summer vacation. We were just in Washington the month prior, however, we were heading back for a family trip with my partners extended relatives. I was, and still, jobless, so finances were a bit tight, but something I really wanted to do was see my friends in Colorado.

It has been three years since I was back in Boulder, Colorado. I flew out for a majority of my friend’s graduation, but it felt like a lifetime had passed since I was living there amongst the foothills. Showing my partner, my home in Naples was priceless.

Side note: I don’t think he fully understands what it meant to take him to my favorite spots, show him my schools, and introduce him to my local friends. I felt in the past relationships I had, I had to plead to have my lovers visit and still I was left with heartache in the wake of my pleas, so it felt indescribable to have him by my side.

He was the one to suggest driving. This time around, it wasn’t any cheaper to drive vs. fly, but a stop in Colorado meant a lot more money. We were going to need a rental car there, so we were going to need to pay more on top of the cost of flying. Luckily we were able to break up the trip into digestible bites.

My Brother graciously offered up his couch, as he has for the past four years at his apartment and allowed my gang of hooligan friends and partners crash at his place for every time I planned a trip to the area. We planned to leave at 10:00am, however, knowing it was a 13-hour drive, we decided to change the rental to 8:00am so we would make it in time to catch dinner and a drink with my brother.

It was the lesser of picturesque drives and had THE MOST tolls, one being 15 dollars, but it was the shortest days. We had all of our energy in front of us as we took to the open roads of New Jersey, Pennsylvania, Ohio, Indiana, and Illinois. We learned we have minimal interest in moving to a mid-western city, but can very easily find a way to pass the time with luxurious rest stops and car games.

After an “active” evening in Wrigleyville, we stuck to our timing of leaving my brother’s place at 5:00am. The friend I was staying within Colorado just had a baby in April, so I wanted to be courteous to their fragile sleep-schedule, as well as catch them when they were all still awake since it had been so long since I had seen her last. We hit the open roads, and a few more tolls, and headed for the Rockies.

We were tired, I struggled to stay awake in the beginning and were struggling with the various on-ramp highway and frequent exits as we left Chicago––fighting to get across seven lanes of traffic was not something either of us wanted to do that early in the morning. But, luckily the sprawling fields of Iowa and Nebraska made for comfortable cruise controlled rides and afternoon naps. We were delayed for a bit in Nebraska when we hit bumper to bumper traffic, slowing us for an hour in the hottest stretch of land with rumbling tummies, but rolling into the mountains of Colorado, and arriving at my friend’s home with Indian food and a babies waiting for us made the difference.

Now, we both knew the fastest way to our destination would have been going from Illinois to Minnesota, North Dakota, Montana, but because I wanted a day to catch up with some college besties, then we decided to make the trip a little longer to hit more scenic spots. We woke up earlier, again, to ensure we made it to Yellowstone during the daytime. Before we could leave Colorado, we had to stop at Santiago’s. If you haven’t been, you need to go. My favorite breakfast was their burrito, on bacon day, with half-n-half sauce; it’s not spicy and not too mild.

This leg was the longest, but also the one with all the firsts. This was my first time in Wyoming and Montana and my first time in Yellowstone National Park. It was so worth the four extra hours and 200 miles to drive through the park, and we left with a year pass for a chance to visit more in the country. Driving along the Grand Tetons, which are pictured above, was spectacular. I saw Old Faithful blow boiling water into the air and Bison graze on the grass outside my passenger side door.

We made it to northern Montana before midnight, which meant we had several hours to nap before our 8:00am deadline. It was the first time I had slept in a rest stop and boy was it cold in Montana at 3:00am, but I wouldn’t change seeing the sunset and sunrise over Montana’s Rockies.

By the end of the trip, we were sleep-deprived, stinky, and disoriented from time changes, but it was such a fantastic experience. I highly recommend grabbing a friend you can spend hours talking to without eating and embark on a trip around the US!  Take a look at the playlist we played on repeat and our mapped journey below. 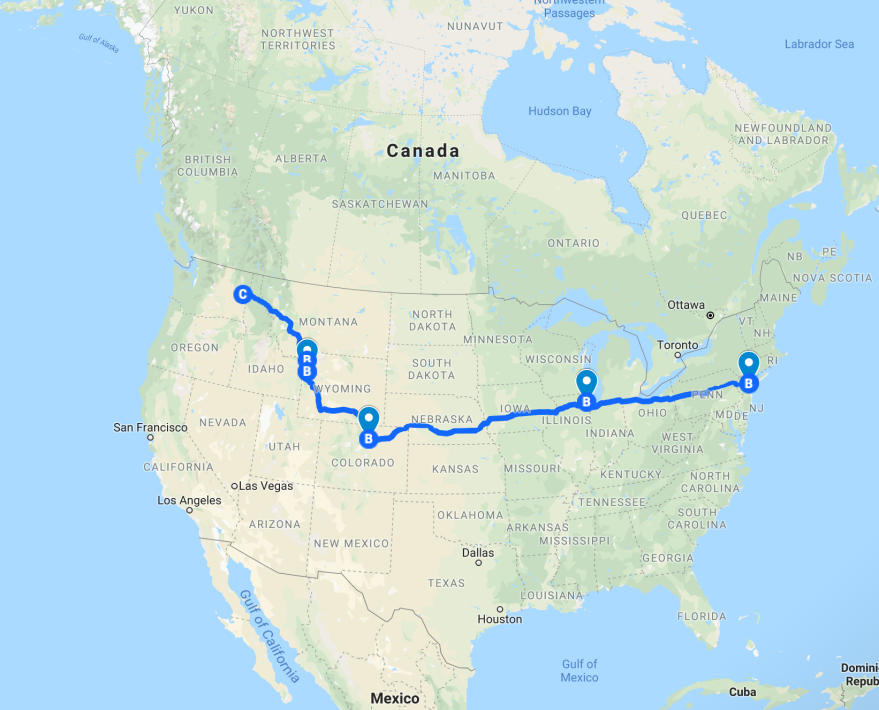